AN EVENING WITH TESS JARAY AND RICHARD PLANK

Last Wednesday, we were invited to Megan Piper’s beautiful showroom in Mayfair for a private talk with British constructivist artists, Tess Jaray RA and Richard Plank. The friendly, informal atmosphere lent to an honest and open dialogue with the artists, who shared insight into their respective practices, their techniques, their challenges and their visions–and how technology has effected their work. Both originally students at the Slade and long time friends, this was the first time they exhibited their works together. Jaray’s laser cut paintings and Plank’s two tone patterned prints derived from a digital rendering of primary numbers question the definition and test the boundaries of two-dimensional art. Touching on influences from De Stijl (Mondrian, Van Doesburg) to Malevich, from music to mathematics and from Renaissance architecture to digital culture, it was pretty cool to share the evening with two artists with such disciplined, logical yet investigatory approaches to art. Jaray was bestowed the UK’s greatest artistic honour by becoming a Royal Academician in 2010. Her paintings can be seen at the Tate and the V&A. Public commissions include the New British Embassy in Moscow and the Piazza, Broadway in Wimbledon. You can read more here. A special thanks to Megan and Charlotte for such a warm welcome! 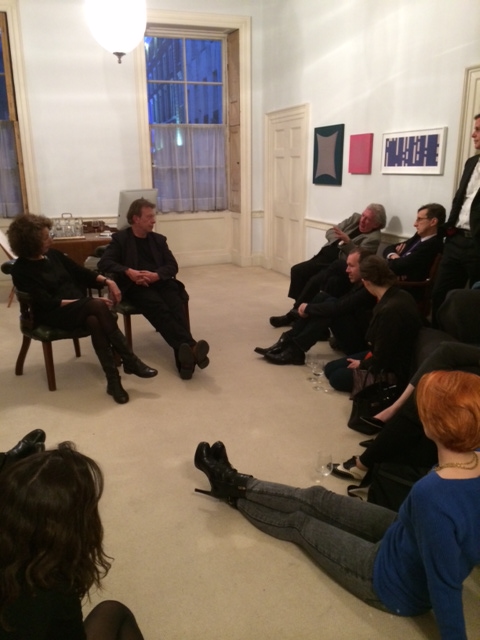